You are here:
Newsroom
News
Becoming a Good Food Nation 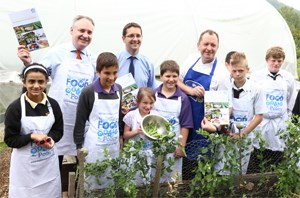 Increasing access for everyone to good quality food to improve Scotland’s diet and food culture will be the top priorities of the ambitious next phase of the Scottish Government’s food and drink policy.

Now the Scottish Government aims to build on that success with Becoming a Good Food Nation, a discussion document that seeks views on how to improve Scotland’s relationship with food through:

It comes as the First Minister adds food to Richard Lochhead’s portfolio, as Cabinet Secretary for Rural Affairs, Food and the Environment, underlining the Scottish Government’s commitment to this policy.

“Scotland is fast becoming one of the world's leading food and drink nations. We have come a long way in terms of reputation and success in a few short years but we can do even better.

“We still have challenges but by working together across society in the years ahead we can build a Good Food Nation. The people of Scotland can enjoy the benefits of this by both producing and consuming quality food and drink at both home and abroad.

“We are already making progress through action being taken by the Scottish Government and our partners. For example, Curriculum for Excellence has created more than 135,000 individual opportunities for pupils to learn about food while all NHS food outlets and prisons now have the Healthy Living Award.

“But we must do more if we are to tackle world-wide threats to global food security, the environmental impact of food production and the £1 billion of food and drink Scots throw away each year. Just as Scotland is a Fair Trade Nation, we intend to be a Good Food Nation.

“And our nation has one of the poorest diet-related health records in the world with obesity alone, if unchecked, set to cost Scotland £3 billion by 2030. Consumption of fruit and vegetables among the poorest 20 per cent of Scots has fallen by a fifth since the recession.

“This discussion document sets out my vision of Scotland as a Good Food Nation where it is second nature to serve, sell and eat fresh, healthy food. Now is the right time to consider opportunities for Scotland’s future, as the eyes of the world are on our nation for our second Year of Homecoming, the Glasgow 2014 Commonwealth Games, The Ryder Cup and the independence referendum.

“Of course, achieving this aspiration will be much easier with the full powers of an independent state. In any case, it will take at least a generation to deliver and will need the support of everyone in Scotland – and so I and our new Food Commission would like to hear views on how we can work together to drive change in Scotland’s food culture.”

“Reinvigorating the Scottish Government’s very successful Food and Drink Policy with a new ambition to turn Scotland into a Good Food Nation is great on so many levels. It will be welcomed by tourism, hotels and restaurants and the extraordinary people who produce the top-class food in Scotland that I get to cook with every day. Above all we can work to build a healthy population in Scotland that understands not only the cost of food but value of food for their own health, and well-being in Scottish society.”

“The ambition of our industry is huge and our effort to drive on the economic success story that is Scottish food and drink is unrelenting. But we are clear that the success of recent years and the key to reaching our goal an industry worth £16.5bn by 2017 is reputation. It is on that point that our economic ambition and the aspiration to be a Good Food Nation go hand in hand.

“Scotland is cementing its place on the world culinary map with a powerful combination of world class products and businesses. That, alongside our natural environment, is what has led Scotland to be labelled a Land of Food and Drink. But our reputation must run deeper still and be underpinned by improving our relationship with food within these shores.

“Scotland is now seen as model to follow by other countries in terms of forging a national food and drink identity and achieving economic growth. If the same level of collaboration that has been the catalyst for that, can also be focussed on wider food issues relating to diet, education and communities our reputation – the platform for future growth – will be stronger still.”

Becoming a Good Food Nation can be accessed via: http://www.scotland.gov.uk/299277

Andy Maclachlan, Sainsbury’s Local Sourcing Manager, said: “Sainsbury’s has long recognised the important synergy between sourcing great products for our customers and providing them with healthy and nutritious food. We welcome the Scottish Government’s new strategy and the aspiration to become a Good Food Nation that they have set out today”.

Frances Birch, Scottish Food and Health Alliance, said: “NHS Health Scotland welcomes ‘Becoming a Good Food Nation’ and the opportunity for all to be involved in shaping its future direction. It is vital that all communities in Scotland have access to a range of healthier food options. Everyone has a part to play in supporting and responding to the consultation to help Scotland in its approach.”

Laura Stewart, Director of the Soil Association Scotland, said: “I am delighted the Scottish Government has taken a strong leadership role in setting out a vision for Scotland becoming a Good Food Nation. We need everyone to take part in this vital conversation about what this will mean for them. We work with farmers and growers and with people involved in food businesses, retail and catering. We want to encourage them, as well as those in communities, schools, universities, nurseries, workplaces and hospitals to put in their tuppence worth. The more people involved in shaping Scotland as a Good Food Nation, the more likely we are to see our communities and our planet to thrive now and in the future.”

David Martin, Head of Policy and External Affairs for the Scottish Retail Consortium, said: “Our members, which include small grocers and the large supermarkets, take their commitment to Scotland’s producers very seriously. They do this because of the selection of high quality Scottish produce and products but also because it makes good commercial sense. Across hundreds of product ranges our members sell millions of pounds worth of high quality Scottish goods here in Scotland and are instrumental in exporting billions of pounds worth of Scottish fare right across the UK through their network of stores.”

Iain Gulland, Director of Zero Waste Scotland, said: "Zero Waste Scotland welcomes the launch of this important and wide ranging discussion, Good Food Nation, especially that it encompasses the entire journey that our food takes. This is about creating a sustainable relationship with growing and consuming healthy food here in Scotland, which should be a circular process. We are working to minimise unnecessary food waste and to ensure that the potential of unavoidable food waste is maximised by using it in nutrient-rich fertilisers which can be returned to our soil to support future, sustainable food production."

Pete Ritchie from Nourish Scotland said: “Nourish Scotland is Scotland's sustainable food organisation and we welcome the launch of the Scottish Government’s plan for becoming a Better Food Nation. Let's all help move the plan into positive action - a network of a community food hubs, an independent Food Commission and moves towards a healthier relationship with food in Scotland.”