You are here:
Newsroom
News
Council of Economic Advisers 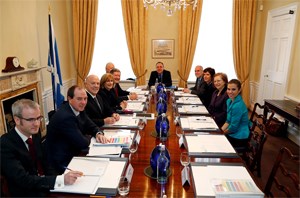 During the Council’s sixth meeting, members discussed how to maximise the economic impact of new powers for Scotland and how they could be best used to promote competitiveness and tackle inequalities.

The devolution paper discussed today will be shared with the Smith Commission for their information.

The Council agreed that in order for such a process to be meaningful and purposeful, any new framework needs to promote efficient policy decision making and ensure that, once established, the economic and financial costs and benefits of using these new powers are captured in Scotland.

In particular, any process of no-detriment on fiscal matters must simply capture the first-round effects of transferring a particular power, with the economic and financial consequences of policy choices that then follow allowed to take their full course. Boosting economic incentives for Scotland, whether that be through taking advantage of Scotland’s distinct strengths or offsetting an economic disadvantage in the UK, should not be overly interpreted as being subject to no-detriment. The clear objective of granting greater powers must be to deliver meaningful discretion and accountability which can only be achieved by granting genuine autonomy for both the policy choices themselves and their outcomes.

The paper considered by the Council today argues that:

At today’s meeting, the Council also considered other work including opportunities to maximise the contribution of women in the economy.

Chair of the Council of Economic Advisers Crawford Beveridge said:

“Devolving a range of taxes to Scotland will benefit both Scotland and the UK.

“For Scotland, taking ownership and accepting accountability for a much greater proportion of its own finances provides an important opportunity to grow a stronger economy and create a fairer society. In our meeting today, we discussed the principles which could underpin an overarching economic and fiscal framework and which, if followed, would provide a workable model for both Scotland and the UK.

“I believe that the Scottish Parliament should be responsible for the full range of taxes levied in Scotland. This way we can continue to drive forward prosperity and fairness in Scotland for everyone in this country.

“We know that the taxes and revenues raised per head in Scotland are higher than the UK as a whole – it’s about time that we had the powers to use it to benefit everyone in Scotland.

“The latest Labour Market stats published today shows Scotland outperforming the UK on employment, unemployment and inactivity rates, which demonstrates the commitment of the Scottish Government in supporting our economy.

“I am particularly pleased to see the progress we are making on narrowing the gender gap in employment. The figures show that despite the global recession the Scottish economy continues to strengthen with overall employment now 43,000 higher than the 3-month period April-June 2007, with female employment 66,000 higher over the same period.

“With discussion on further powers for the Scottish Parliament now taking place it is essential that we have the full tools we need to support employment opportunities for everyone in Scotland.”

For membership of the Council of Economic Advisers, please visit http://www.scotland.gov.uk/Topics/Economy/Council-Economic-Advisers

For the latest report from the Chair, Crawford Beveridge, please visit: http://www.scotland.gov.uk/Topics/Economy/Council-Economic-Advisers/Reports

The Council of Economic Advisers