You are here:
Newsroom
News
‘Creating a fairer Scotland’ 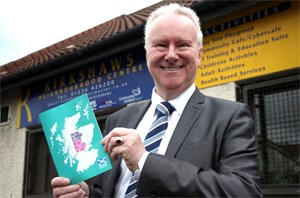 Nation asked for views on how to build a more equal society.

People across Scotland are being asked to take part in a national discussion about how the country can be a fairer and more equal place to live.

Over the past eight years Scotland has had a rising employment rate, improved educational outcomes and people living healthier lives – now the Scottish Government wants to mobilise the nation to help tackle the scourge of intergenerational poverty and create fairer opportunities for all.

To reach more people and build on the community-led discussions of the Referendum and General Election, widespread, direct involvement of communities will take place the length and breadth of Scotland.

People will be invited to set out their vision of a fairer Scotland and suggest practical solutions, based on local and personal experience.

Capturing the voices of those with direct experience of poverty and exclusion will be vital. Voluntary organisations and public sectors, charities, councils, large and small businesses, trade unions will also play a pivotal role.

Social Justice Secretary Alex Neil launched the national discussion, which will take place over the summer and into autumn, in the Kirkshaws Neighbourhood Centre in Coatbridge, saying: “Tackling inequality, along with building a prosperous and competitive economy, is at the heart of the Scottish Government’s commitment to creating a better country for all. The two go hand in hand.

“The Scottish Government’s vision is for a Scotland where people are healthier, happier and treated with respect, and where opportunities, wealth and power are spread more equally. We want to discuss issues like childcare, fair work and health and hear what people believe could be done to create a better Scotland.

“It is important that we are an open and accessible government. We want to tap into conversations many people and communities are already having throughout Scotland, rather than consult on whether or not people agree with a range of ready-made proposals.

“We recognise that it will take time to achieve our shared vision of a fair, equal and socially just Scotland. We are not looking for quick fixes or temporary measures but long lasting change that can benefit the whole nation.”

Conversations will take place across the country and online, including a series of events over the summer and autumn where people can discuss the issues that mean most to them. An action plan, with people and their priorities at its heart, will be published in the new year with milestones to the next Parliament and beyond to help us achieve our goals.

Sir Harry Burns, former Chief Medical Officer and now Professor of Global Public Health at Strathclyde University, said: “The Government has recognised that the days of doing things to communities are past. Instead, the new approach, outlined in ‘Creating a Fairer Scotland’ is about doing things with communities.

“By meeting and listening to the marginalised and excluded people of Scotland, they will hear in raw detail what it’s like to live with fear of violence, hunger, cold and addiction. If communities are genuinely involved in shaping solutions to their own problems, those solutions will be enduring and effective.”

Peter Kelly, Director of The Poverty Alliance, said: “Today's launch holds out the potential for a new approach to the problems of social injustice in Scotland. For once, we are not being asked to comment on plans that have already been made, or to pass judgement on some blueprint after it has been developed. By entering into genuine dialogue with people across Scotland we can begin to develop lasting solutions together.”

Tressa Burke, Chief Executive of the Glasgow Disability Alliance, said: “Our 2500 disabled members are delighted that the Scottish Government is leading by example and building on the energy of the referendum by beginning powerful dialogues and relationships with communities across Scotland. This matters because disabled peoples’ lives are blighted by poverty, exclusion and inequality on a daily basis. By working together, we are confident that we can come up with necessary steps and actions to tackle barriers and achieve a fairer and more equal life for disabled people and for all Scotland’s people.”

To join the conversation: