Four secretive sea creatures previously unknown to science have been discovered in deep ocean waters hundreds of miles off the north west coast of Scotland.

Marine Scotland trawl surveys off the continental shelf in the north Atlantic have uncovered a brand new species of large sea snail, two kinds of clams and a marine worm.

International experts have now confirmed that they are completely new to science, meaning the mysterious molluscs have managed to avoid detection during decades of underwater research around the Rockall plateau.

The finds are incredibly unusual and the discovery of the clams and worm at a single site is potentially hugely significant as it could indicate the presence of a cold seep, where hydrocarbons are released from the sea bed. If confirmed, it would be the first cold seep to be discovered in the vicinity of Rockall.

"Our oceans are often called Earth's final frontier and these new species prove just how much we still have to learn about this rich marine habitat. Scottish waters cover an area around five times bigger than our land mass and are miles deep in places, and these hidden gems offer a fascinating glimpse of the treasures that still await discovery under the waves.

"While understanding more about these great depths is clearly very challenging, we know that Scotland's seas are home to a diverse range of precious sea life and it is our responsibility to protect this fragile environment. The area where these species were found is not currently fished and the confirmation of a cold seep is likely to result in the region being closed to bottom contact fishing."

Jim Drewery from Marine Scotland Science, who oversaw the research on the deep water invertebrates, said:

“The discovery of these new species is absolutely incredible, especially when you consider that the sea snail measures a relatively large 10 cm yet has gone undetected for decades. Its capture on these surveys could be due to the new techniques we are now employing at Marine Scotland Science in our research on the deep sea floor.

“The project we were undertaking was designed to provide advice that would help balance both commercial fishing and conservation interests in the Rockall area. The potential cold seep and its dependant community of marine life is a great find as it is just the sort of habitat we were hoping to pick up on these surveys.

"I am particularly excited by the discovery of the marine worm Antonbrunnia, the first of its kind to be found in the entire Atlantic. It was actually discovered by international bivalve expert Dr Graham Oliver inside one of the clams he was confirming as a new species at his laboratory at the National Museum of Wales. We would like to thank Dr Oliver and the Belgian conchologist Koen Faussen for their tremendous contribution to this research

"Marine Scotland Science has been able to narrow down the location of the potential cold seep to a small area 260 miles west of the Hebrides in the Rockall-Hatton basin. Further research is now needed, which would involve going down to take a look at the ocean floor three quarters of a mile underwater."

The sea snail Volutopsius scotiae and clam Thyasira scotiae have been named after the research vessel MRV Scotia while the clam Isorropodon mackayi has been named after renowned mollusc expert David W Mackay. The marine worm Antonbrunnia has not yet been named and is currently being examined at the National Museum of Wales. 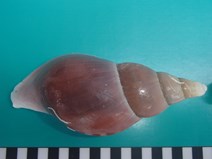 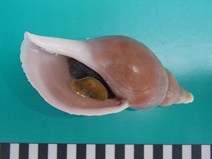 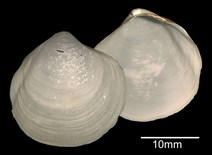 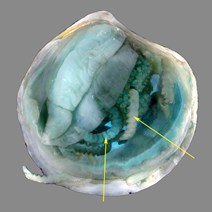