The new regulations will see the establishment of a scheme that will include aluminium and steel cans as well as drinks containers made of glass and PET plastic with a 20p deposit.

By increasing both the amount and quality of this material being recycled and reducing litter, the system will help to combat climate change as well as offering benefits to industry and the public.

“Our Deposit Return Scheme is the first national scheme of its type in the UK. It is ambitious in scale and scope, and gives the people of Scotland a clear and straightforward way to do their bit for the environment.

“Research has shown that the scheme is anticipated to reduce the £46 million spent each year on litter removal and is expected to reduce emissions equivalent to taking 85,000 cars off our roads, while also enjoying widespread public support across Scotland.

“There is a global climate emergency which demands we show ambition to tackle it and safeguard our planet for future generations. This process will enable us to fine tune our proposals to ensure that they work well for industry, retail and the public, and we will continue to work with the Implementation Advisory Group to that end. I am delighted to confirm that the regulations required to bring our Deposit Return Scheme into reality have now been laid.”

“These regulations put Scotland on track to deliver a world class deposit return scheme. Placing a 20p deposit on drinks bottles and cans shows that these materials have a value to our economy, and a cost to our climate if they are wasted.

“That 20p incentive will boost recycling and cut Scotland’s CO2e emissions, playing a part in the fightback against the climate emergency. It's little wonder that nearly four in five Scots support it. With drinks producers given the opportunity to group together to deliver the scheme, they can lead this exciting step towards a more circular economy.”

The regulations will operate under the super affirmative process and a copy of the Regulations has been published in accordance with the enabling powers in the Climate Change Act (Scotland) Act 2009. These will be available for comment by parliament and the general public until 10 December 2019.

The Scottish Government will continue to work with the Independent Advisory Group in developing our Deposit Return Scheme proposals, and will consider any representations made before bringing forward a final set of Regulations for the normal affirmative procedure, including a vote in the Scottish Parliament.

A recent survey by Zero Waste Scotland showed strong public support for the scheme, including the inclusion of glass. 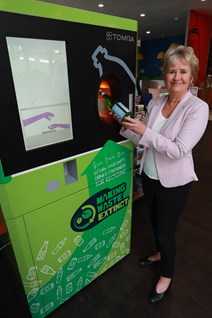