You are here:
Newsroom
News
Festive drink and drug-drive campaign

The Justice Secretary and Police Scotland have launched this year’s festive campaign to tackle drink- and drug-driving.

This is the first festive enforcement and awareness campaign to include the use of the new drug-drive laws which came into force last month.

The campaign highlights the criminal and personal consequences of being found guilty of driving a vehicle while under the influence alcohol or with drugs in your system.

“Driving a vehicle while under the influence of drugs or alcohol is totally unacceptable and puts not only the driver, but passengers and other road users, at risk of serious injury or even death. As well as such devastating consequences, drivers caught drink or drug-driving also face significant criminal penalties which could result in them losing their licence or their liberty.

“The new drug-driving law and Scotland’s low driver-alcohol limit are focused on making our roads safer for everyone.”

"As we move into the festive party season, we are reminding motorists of the devastating consequences driving with alcohol or drugs in their system can have.

"New roadside testing for drugs was introduced on 21 October and disappointingly we have seen nearly 100 people provide positive tests in the first four weeks. Our Festive Drink Drug-Driving Campaign starts on 1 December and we will have dedicated resources on patrol, targeting motorists who choose to take the risk of taking drugs and driving or drinking and driving.

"I am urging people to plan ahead during the party season. Think about how you’re going to get home safely and don’t forget about the impact alcohol can still have the morning after."

This is the first festive period when motorists face roadside drugs test, under a new law which came into force 21 October. This introduced drug-drive limits and a zero tolerance approach to the eight drugs most associated with illegal use, including cannabis, heroin and cocaine.

Police can now carry out testing using mouth swabs for any motorist they suspect of drug-driving or who has been involved in an accident or stopped for a traffic offence.

During the first four weeks of the new law coming into force (21 October-18 November) 96 people have provided positive roadside tests. Of the 96, six were women aged between 23 and 42. The 90 men were aged between 17 and 50. 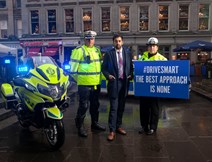