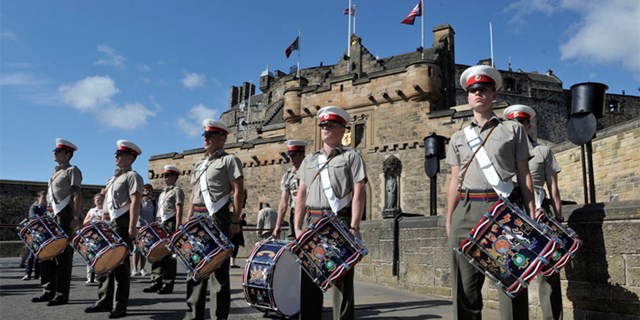 Final preparations are underway for Scotland’s Drumhead Service, procession and memorial on Sunday in Edinburgh that will mark the centenary of the outbreak of the First World War.

Several musicians from the Band of the Royal Marines were at the esplanade of Edinburgh Castle today to practice constructing and deconstructing the altar that will form the centrepiece for the multi-faith service, which is expected to be attended by a congregation of more than 8,000 people representing all parts of Scotland.

Hundreds of representatives of the armed forces will be at the city’s Redford Barracks tomorrow for a full rehearsal of the major commemoration event, believed to be the first of its scale in Scotland’s history.

The City of Edinburgh Council is planning to implement several road closures and restrictions to facilitate the event. They include the complete closure of Johnston Terrace, High Street, Canongate, Lawnmarket, Queen’s Drive, Chambers Street and a number of nearby roads at various times between 7.15am and 2pm on Sunday. Loading restrictions will also affect a number of streets from 6pm on Saturday. Full details of road closures and restrictions are available from the City of Edinburgh Council’s website at: www.bit.ly/1y63Khz

Lothian Buses’ services 6, 9 and 35 will also be affected. Information about how this will affect local journeys is available from the Lothian Buses website at: www.bit.ly/1kHOhE7

Today organisers of the Drumhead Service released a final batch of free tickets to those who are able to collect them in person from the Royal Edinburgh Military Tattoo’s office on Market Street in Edinburgh up until 2230 on Saturday evening, or from The Hub at Castlehill on the Royal Mile on the morning of the event.

Signalling the start of the five-year Scottish Commemorations Programme, the Drumhead Service will replicate those held on the front line 100 years ago when, in a long-held military tradition, neatly piled drums with draped Colours were used in place of an altar.

The service will feature troops from the Royal Navy, Army and Royal Air Force and will be accompanied by music from three military bands, two cadet bands, three choirs and around 200 massed pipes and drums. The service, procession and memorial will be attended by guest of honour, Edinburgh’s Lord Provost and Lord Lieutenant Donald Wilson.

At the end of the Drumhead Service, the military bands and tri-service guards will parade down the Royal Mile accompanied by around 100 marching veterans and 100 cadets. The congregation will then be invited to follow in a procession down the Royal Mile to Holyrood Park, where over 1,000 replica Commonwealth War Gravestones will form a temporary memorial, at which people will be invited to leave poppies, wreaths or markers.

“Sunday will be a very special, very memorable occasion that will unite the people of Scotland – people of all ages and from all parts of the country – in a shared act of commemoration, remembrance and reflection.

“The event will give a sense of what it might have been like to enlist during the first few weeks and months of the war. The multi-faith service on the esplanade of Edinburgh Castle represents the moment before deployment; the procession down the Royal Mile will symbolise a ‘March as to War’ and the gathering in Holyrood Park, the approach to the front and assembly for military action. The memorial of over 1000 headstones will provide a vital sense of scale and a focus for acts of individual and collective commemoration.”

“The Drumhead Service, procession and memorial on August 10 will signal the start of Scotland’s commitment to commemorating the centenary of the First World War.

“The event will bring the people of Scotland together to consider the impact of that brutal conflict, which claimed the lives of more than 100,000 Scots and left many more injured or disabled, forcing families and loved ones across the country to come to terms with the terrible consequences.

“From this Sunday until January 2019 we will encourage the people of Scotland and those with connections to Scotland to recognise the significant and broad impact the First World War had on our nation, and to reflect on its lasting social and civic legacy.”

“Many thousands of people have shown an overwhelmingly strong willingness to take their place at the Drumhead Service, procession and memorial on Sunday.

“We have worked with local authorities, the armed forces, the veterans community and charities to ensure that people of all ages and from every part of Scotland will be there to participate in this important commemoration.

“With final preparations now underway, the further release of a number of tickets represents the last opportunity for the people who have thus far been unable to obtain tickets to take their place at an event upon which we and our children and our grandchildren will in years to come reflect that ‘we were there and we remembered’.”

“Every August, visitors flock to the Royal Mile to experience the buzz of the festival season. This Sunday, the street will pause for a very special event. The Drumhead Service and procession will offer Scotland the opportunity to come together for a moment of quiet reflection to remember the thousands of Scots who fell during the First World War. It is very fitting that as the Capital city we should play our key part in these commemorations and show our support and gratitude for the enormous sacrifices made by courageous men and women in service of this country.”

Photos of representatives of the Band of the Royal Marines are available for media to download at https://www.flickr.com/photos/scottishgovernment. These photos are free to use.

Thousands of seats for the ticket-only Drumhead Service have been allocated by Scotland’s 32 local authorities to people in all parts of Scotland. Representatives of the armed services, veterans groups, charities and civic leaders across Scotland will also attend.

On July 22, the Scottish Commemorations Panel made a thousand additional places available to those who had not already secured tickets through their local authority or been invited by other means. Those tickets were allocated within two days and due to popular demand a further 1000 were released and have since been allocated.

As final numbers have begun to settle, all remaining tickets will be made available from today to those who request them in person at the Royal Edinburgh Military Tattoo office on Market Street in Edinburgh (up until Saturday at 2230) or from The Hub, Castlehill, Royal Mile, Edinburgh from 0800 until 1015 on Sunday morning.

Tickets will be allocated on a first-come first served basis and up to ten tickets, subject to availability, can be requested by each applicant. Those requiring wheelchair access or with other accessibility requirements should call 0131 225 1188.

The Drumhead Service will start at 10.30 on August 10 and will last approximately half an hour. Doors open at 9.00 and the congregation should be seated by 10.00. The whole event – including the procession down the Royal Mile and memorial at Holyrood Park - is expected to last until 14.00, although the public can remain in the park until 18.00 when the memorial will be closed.

Lothian Buses’ services will be diverted as follows:

From the start of service until 1400 hrs on Sunday 10 August:

The Drumhead Service, procession and memorial will mark the start of the Scottish Commemorations Programme which will remember eight particular events from World War One that had a significant impact on Scotland. They include the start and end of the war, major battles including Gallipoli, Loos, Jutland and Arras and domestic incidents such as the Quintinshill rail disaster and the loss of HMY Iolaire.

The Scottish Commemorations Panel is working with the Scottish Government, Scotland Office, Ministry of Defence, Historic Scotland, Edinburgh Council and the Royal Edinburgh Military Tattoo to deliver the Drumhead Service, procession and memorial.