In a wide-ranging refresh of her ministerial team, the First Minister is bringing frontline experience in a number of key areas, such as health and education, into government.

Subject to Parliamentary approval, the following new ministers will be appointed:

Other ministers remain in post with new or additional responsibilities:

Commenting on the new appointments, the First Minister said:

“The new ministers I am announcing today bring a range of fresh talent to the Scottish Government, ensuring that we are equipped to deal with the challenges and maximise the opportunities facing the people of Scotland.

“The ministerial team represents constituencies the length and breadth of Scotland, coming with a range of professional backgrounds and bringing a breadth of real life experience to their roles.

“For instance, Claire Haughey brings her extensive background as a mental health nurse to the mental health portfolio, Kate Forbes will bring her finance background to bear in her brief and Ivan McKee brings the expertise he has acquired from a highly successful career in business to the role of Trade and Innovation Minister.

“All of the new ministers I have appointed today, have already proven themselves as effective parliamentarians – and I know that they will do likewise in Ministerial office.”

These ministerial nominations follow the announcement yesterday of a new Scottish Government Cabinet.

The appointment of Minister for Further Education, Higher Education and Science will follow in due course. 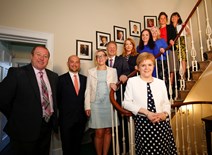