You are here:
Newsroom
News
FM kicks off work on Aberdeen Bypass 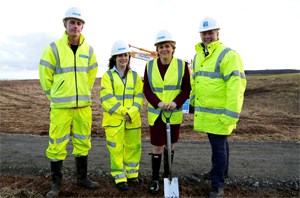 Construction to support 1,500 jobs and £6bn investment in the north-east.

First Minister Nicola Sturgeon was in the Granite City today to kick off work on the £745 million Aberdeen Western Peripheral Route/Balmedie-Tipperty road scheme.

Construction will support around 1,500 jobs and over 100 apprenticeships, graduate places, and other training opportunities.

The scheme will be delivered in stages, with completion expected in winter 2017, around six months ahead of schedule.

First Minister Nicola Surgeon, who was in Aberdeen with her Cabinet, said:

“This is a landmark day for the north-east, with the construction of the largest road scheme of its kind anywhere in the UK now underway.

“As the oil and gas capital of Europe, Aberdeen is a major driver for the Scottish economy and I am determined we do all we can to improve infrastructure and transport links to ease commutes, boost business and keep Aberdeen internationally competitive.

“The scheme is already bringing short-term economic benefits through £221 million of sub-contracts, either put to the market or soon to be advertised, and longer-term benefits estimated to bring £6 billion of investment and 14,000 jobs to the north-east over the next thirty years.

“During construction alone, the bypass is expected to bring around 1,500 jobs during its peak, and over 100 training and vocational places which will ensure our young people get valuable opportunities to enter the workplace. Scotland has the highest employment and economic activity rates, and lowest unemployment, including youth unemployment, of any of the four nations in the UK – and it’s clear the Aberdeen bypass is contributing to this success.

“The start of work today is a big win for local communities, businesses, and road users and will bring much needed early relief to the congestion we see in and around Aberdeen on a daily basis.”

“Over 58km of new road, a dozen new junctions, 14 miles of new slip roads, two new river crossings, and 150 other structures will soon be delivered. Our carefully planned management of the scheme’s procurement will see junctions around Aberdeen airport finished next year, the Balmedie-Tipperty section of the A90 finished ahead of schedule in spring 2017, and completion of the entire scheme by winter that year, some six months ahead of the original schedule.

“There have been many challenges to get us on the road, but I’m delighted construction of this new bypass is now underway to deliver for businesses, commuters and communities right across the north-east.”

"Today is a very significant day for the whole of the north east, marking the moment when the project moves into an exciting phase of construction work beginning on the ground.

"The AWPR/Balmedie-Tipperty scheme will transform the region's economy by streamlining journey times and encouraging business growth. The City and Shire Councils are making a significant investment in the project's delivery, which will soon pay huge dividends in terms of efficient transport, job creation and economic development."

“It is very satisfying to be marking today’s event here at Balmedie, one of the key communities that will benefit from the improvements the AWPR will bring to the north-east’s road network.

“The project is gaining momentum and we’ll soon be seeing a great deal of activity across the area as construction of this vital route for the area takes shape.”