You are here:
Newsroom
News
Funding announced for tour to Japan

Funding announced for tour to Japan

The Scottish Government is supporting the BBC Scottish Symphony Orchestra’s residency at the first-ever BBC Proms Japan with a £50,000 grant.

Culture Secretary Fiona Hyslop announced the funding during her visit to Japan this week, which has included discussions around cultural exchanges and promoting Scotland’s arts sector internationally.

BBC Proms Japan takes place from October 30 until November 4 in Tokyo and Osaka, and will be recorded for broadcast on BBC Radio 3 for BBC Sounds.

As well as helping the orchestra deliver its BBC Proms Japan residency, the funding will increase Scotland’s profile in Japan in the lead up to the 2020 Tokyo Olympics.

Ms Hyslop said: “Scotland is respected throughout the world for its excellence in the performing arts. Sharing cultural experiences through events such as the Japan Proms plays an important part in fostering valuable links between our two countries.

“The Scottish Government is proud to support the BBC Scottish Symphony Orchestra’s performances at the inaugural BBC Proms Japan. It is a considerable honour for the orchestra to be the first to give a Proms season here to Japanese audiences for the first time.”

Dominic Parker, Director of the BBC Scottish Symphony Orchestra, said: “We are thrilled to be making this first visit to Japan in the BBC SSO’s history, representing both Scotland and the BBC Proms. I am very grateful to the Scottish Government for its crucial partnership in this ambitious tour.”

Chief Conductor Thomas Dausgaard will lead the orchestra in daily concerts at the six-day festival, with a programme including core classical repertoire, British music and new music, accompanied by a varied schedule of learning activity in the region.

The orchestra will hold interactive musical workshops in schools in Yokohama while in Japan. This will include a mini-concert with a Japanese translator, and musical games designed to encourage creativity, active listening and musicianship.

The BBC SSO plays a leading role in Scotland’s arts scene with regular seasons across our major cities and a strong presence at the Edinburgh International Festival. It is also valued for its community work with organisations like Sistema Scotland. 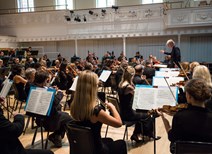