A project which supports people in distress will be extended to 16 and 17-year-olds across four areas of Scotland.

Currently operating across Lanarkshire, the Borders, Inverness and Aberdeen, it provides support to people aged 18 and over who present to emergency services and primary care in distress or emotional pain.

The project has helped almost 3,000 people since it launched two years ago. From summer, it will be extended to support 16 and 17-year-olds across the four pilot areas.

“Mental health is an absolute priority for the Scottish Government and our ten-year mental health strategy clearly sets out our vision to address a number of challenges, including the provision of more efficient and effective mental health services and supporting mental health in primary care.

“Our pilot DBI services have already made significant progress over the past two years, so I’m pleased to announce these will now be extended to 16 and 17-year-olds from the summer.

“Early intervention like this is such an important part of how we treat mental and emotional health and the DBI is all about equipping people with the skills and support to manage their own health and to prevent future crisis.”

“It’s fantastic news that the connected, compassionate support which DBI-trained staff provide to those in distress is being extended to 16 and 17-year-olds.

“While this innovative project is still in the pilot phase, the extension is also testimony to the hard work and commitment of  health, police and Scottish Ambulance Service staff, as well as the other organisations providing support.”

The DBI programme is currently being piloted in four areas – Aberdeen, Borders, Inverness and Lanarkshire.

DBI training has been developed by the University of Glasgow’s Institute of Health & Wellbeing.

DBI will be extended to 16 and 17-year-olds in Lanarkshire and Borders at the end of May, followed by Inverness and Aberdeen at the end of July.

One person who has benefited from the DBI programme in Lanarkshire is 19-year-old Julia Stachursk. During a very low point in her life last summer after a series of personal setbacks took their toll on her mental health, Julia attempted to end her life.

Following a conversation with a DBI trained nurse, Julia agreed to be referred to the 14-day support programme. Almost one year on, she says its intervention has helped her cope better with life.

She said: “I didn’t realise it at the time, but I was under a lot of stress as a result of my job and exams at university.

“I was also experiencing racist bullying as a result of my Polish background and there were folk in my local community who were making my life a misery which forced the family to move.

“As a family we were also struggling financially and it all just got too much for me.

“I just couldn’t see a way out and tried to do what I did.

“I wasn’t sure what to expect, but I was very impressed with the rapid response I received. It was really helpful having someone to talk to and help me work through all the issues that were making me feel the way I did and better understand them.” 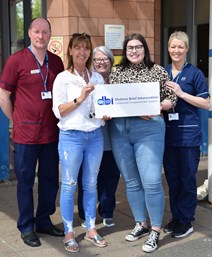