You are here:
Newsroom
News
More powers for Scotland’s islands 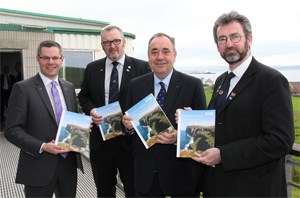 Scotland’s island communities will have greater control over their local economies, natural environment and be represented at the heart of government in an independent Scotland, First Minister Alex Salmond said today.

‪Launching the island prospectus, Empowering Scotland’s Island Communities, in Kirkwall, the First Minister outlined the most comprehensive package of powers for the island communities and highlighted the benefits independence will bring.

In the prospectus, the Scottish Government has committed to implement a range of proposals, including:

‪These proposals will complement the range of recent measures already being implemented by the Scottish Government, including:

‪“Today’s prospectus is the most comprehensive package for empowering Scotland’s island communities that has been put forward by any Government. It recognises the unique contribution that island communities make to modern Scotland, and also the distinctive needs and priorities they have.

‪“Most of all, though, it recognises that Scotland’s islands have huge potential – a wealth of culture and history; stunning landscapes; massive renewable energy resources; and a host of successful businesses in sectors such as food and drink, life sciences and tourism.

“We are determined to work with the islands communities to unleash that potential and to create a sustainable and prosperous future. By doing so, we will honour the principles of subsidiarity and local decision-making at the heart of the Lerwick Declaration. And even more importantly, we will help to build wealthier and fairer island communities, as part of a wealthier and fairer Scotland.”

‪“The launch of Empowering Scotland’s Island Communities is a hugely significant milestone for the Our Islands Our Future campaign. Over the past year we’ve taken a politically neutral stance in presenting the case for a stronger future for our islands.

“The Scottish Government has clearly been willing to consider, negotiate and respond positively to the arguments we’ve made. The detailed response to the campaign published today represents a comprehensive commitment to islands in general and our island groups in particular. It establishes a framework for how our islands can be empowered and a bench mark for our engagement and relationship with government.“There is now a far greater understanding of the unique nature and needs of our island communities and that in itself bodes well for our future.”

"We asserted at the outset of this process that the seas and the seabed around us are hugely important - both socially and economically - to our islands. By implementing the measures contained in Empowering Scotland's Island Communities we can maximise the opportunities presented by fisheries and aquaculture, and realise the full potential of marine renewables, while protecting our pristine environment.

“Crown Estate powers and a share of the income generated from leasing agreements will allow us to support investment in our coastal communities and ensure that this has a lasting and sustainable impact. By strengthening and embedding the County Council Acts' powers, each of the Islands' Councils will be better able to manage the diverse and sometimes conflicting demands on the marine environment.”

“This is a historic day for our island communities. When we launched Our Islands Our Future a year ago we could not have anticipated the amount of interest and discussion we were going to generate. This launch of the Scottish Government’s Prospectus is a product of those discussions and negotiations on a wide ranging list of subjects including the Crown Estate, Grid connections and the constitutional position of Island areas.

“Working closely with the Scottish Government, we have set out an agenda for the way forward for our Islands. The Scottish Government has now put forward the proposals in Empowering Island Communities which I warmly welcome. Of course, the work doesn’t stop here. Irrespective of the outcome of the Referendum in September there is much that can be achieved for Scotland’s islands and our on-going task, as always, will be to maximise the benefits for those who live in our Island communities.”