Business, industry and innovation Law and order Equality and Rights

He said that an independent Scotland would be ideally placed to implement urgently needed reforms to protect the most vulnerable consumers.

It follows last week’s announcement that an independent Scotland would use new decision making powers to ensure stricter regulation for the payday loan industry, setting up a new regime to cap interest rates and restrict the ‘rolling over’ of debts.

Research by Consumer group Which? shows that 85 per cent of people have received more than one unwanted call in a month, of these almost one in ten people had more than 50 cold or more.

An independent Scotland would work with consumer groups and business to bring forward options for improvement. These could include:

The proposals are contained in a discussion paper outlining options for consumer protection and representation in an independent Scotland which is due to be published this week.

“Nuisance calling is now a regular feature of our daily lives. Research shows that the high volume of unwanted calls we receive has left almost 60 per cent of people too intimidated to answer the telephone in their own homes. This is particularly true for older and vulnerable people.

“This is not acceptable. The Scottish Government wants to cut off nuisance calls for good, but the Scottish Information Commissioner currently has no jurisdiction to intervene.

“We agree with Ofcom and Which? that the current plans by the UK Government do not go far enough to protect people from the stress and inconvenience of cold calling.

“We must take action to stop unscrupulous companies continuing to target the vulnerable. An independent Scotland with decision making powers would better serve and protect consumers through regulation, tough enforcement and working with industry to tackle the problem.”

Which? Research on nuisance calls is available here: http://press.which.co.uk/whichpressreleases/government-must-call-time-on-nuisance-calls-and-texts/ 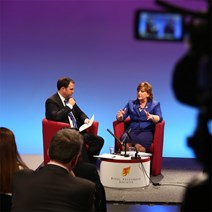