The new MPA, off the West of Scotland, will give additional protections to some of the deepest parts of Scotland’s seas, protecting Scotland’s unique deep sea marine ecosystems.

The addition of the site will mean more than 30% of Scotland’s seas are now covered by MPAs, taking Scotland past the proposed new global target for 2030 currently being negotiated by the UN Convention on Biological Diversity. The designation of this site is part of a final package of MPAs that aim to reach the international target of 10% global MPA coverage by the end of 2020.

The West of Scotland MPA covers an area of over 100,000 square kilometres, making it the largest MPA located in national waters in the entire North-East Atlantic.

Featuring the deepest parts of Scotland’s seas at over 2,500 metres, the site will safeguard some of the most vulnerable habitats and species on the planet, including deep sea sharks, coral gardens and a diversity of other fauna.

“Scotland’s deep sea waters are home to a number of threatened species and habitats including coral gardens and deep sea sharks.

“The designation of this site will address one of the last gaps in our MPA network and will be key in achieving the international target of 10% of the world’s oceans covered by an MPA by the end of 2020.

“It also clear evidence of Scotland’s commitment to lead by example internationally on environmental protection.

“Protecting Scotland’s marine environment is crucial for supporting the sustainable recovery of our marine industries. This designation will also form a key element of our Blue Economy Action Plan, which we committed to developing in our Programme for Government.”

Map of the West of Scotland MPA 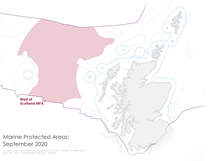