You are here:
Newsroom
News
Road to written constitution 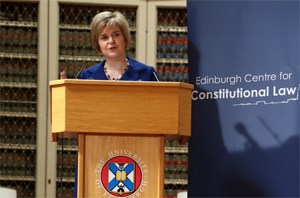 Views sought on draft Bill for a ‘Scottish Declaration of Independence’.

The draft Scottish Independence Bill is now open for public consultation and includes details on how an independent Scotland could prepare a permanent written constitution in a fully participative process led by the people.

The Bill also sets out immediate arrangements for independence – such as the role of government, human rights and the rule of law - and would form the interim written constitution.

The interim constitution proposes an obligation to advance towards nuclear disarmament, the strengthening of human rights protection, the safeguarding of the wellbeing of children and protection for the particular needs of local government and island communities.

In a keynote speech at University of Edinburgh’s Centre for Constitutional Law today, Ms Sturgeon will say:

“The great national debate we are engaged in is an intensely practical debate about how independence can improve the lives of people in Scotland.

“The key constitutional and practical point here is that with independence the Scottish Parliament can deliver an economic policy tailored to our needs and designed to take advantage of our great wealth. We will be able to retain the proceeds of growth in our economy in the form of increased tax revenues.

“With independence, Scotland will be a national economy with all the tools of other independent states. Independence as our constitutional future puts the practical responsibility into our own hands.

“A written constitution can be the foundation on which we can build that better Scotland.

“A written constitution is an important part of a nation’s identity – it defines who we are and sets out the values that we hold dear. It would be our ‘Scottish Declaration of Independence’, founded on the principle that in Scotland, the people are sovereign, not the Government or the Parliament.

“Our draft Scottish Independence Bill, and its accompanying consultation paper, set out our proposals for the steps that will follow a vote for independence to provide Scotland with a robust platform to make the transition. The Bill also sets out the framework for the Constitutional Convention that will follow independence and will develop Scotland’s permanent written constitution.

“This Scottish Government has set out some of the proposals that it would make to that Convention for the permanent constitution. But the process of creating the constitution – the engagement by the people in it – will be as important in many ways as its contents. As well as political parties and civic society, the process should ensure that the sovereign people of Scotland are centrally involved in designing and determining a written constitution as the blueprint for our country’s future.

“Currently we are without a written constitution, and the UK is the only country within the European Union or the Commonwealth that does not have a written constitution or a Constitution Act. But on September 18th the people of Scotland will be sovereign as they make the decision on Scotland’s future. Only with independence can we keep that power over our own destiny.

“This is a very exciting time and I would encourage everyone to have their say on the Bill. It is an exciting and unique opportunity to shape our nation, celebrate and protect our values and commit ourselves to building a better country.”

The consultation document and guidance on how to respond to it is available here: http://www.scotland.gov.uk/Publications/2014/06/8135/0

The Scottish Independence Bill would be accompanied by a re-written and refreshed Scotland Act. It would be legislated for post-referendum after competence to make preparations for independence had been transferred from Westminster. It would be introduced to the Scottish Parliament in early 2015.