You are here:
Newsroom
News
Salmon exports to Japan

Supplying salmon to a Japanese sushi chain has boosted a Scottish company’s exports to the region by 25% in the last year.

External Affairs Secretary Fiona Hyslop visited a branch of Genki Sushi in Tokyo, supplied by The Scottish Salmon Company, while on a visit to Japan to strengthen trade and investment links.

Ms Hyslop met executives to taste ‘Tartan Salmon’ as Mr Takashi Houshito, CEO of Genki Sushi, said the company was looking to continue to promote the delicacy in its restaurants.

“Japan is an important part of our international trade landscape and we are committed to supporting Japanese companies looking to connect with suppliers of our premium goods and services.

“Scotland’s reputation for quality extends across our entire food and drink sector. Along with salmon, our seafood fits well with the demands of discerning Japanese customers.”

“Japan and the Far East is a key market and demand for our salmon has helped drive a 25% increase in our exports over the past year.

“We expect this to increase as more consumers experience the great taste and provenance of our quality Tartan Salmon. The success of Genki Sushi’s showcase of Scottish salmon is testament to this.

“We take great pride in our Scottish heritage, and this is demonstrated through our commitment to bringing the finest quality Scottish salmon to worldwide markets.”

Genki Sushi’s supplier was introduced to The Scottish Salmon Company at a Showcasing Scotland event in October 2017, supported by Scottish Development International.

Tartan Salmon has been trialled at 27 Genki Sushi restaurants in Japan. The initial success of this promotion has been extended to 127 Uobei stores – a subsidiary group of Genki Sushi.

The Scottish Salmon Company, based in Edinburgh, has more than 60 sites across the west coast of Scotland and the Hebrides. Established in 2010 the company employs more than 650 people.

Developed by SSC in response to the growing demand for salmon in Japan, Tartan Salmon is raised in the remote Western Highlands and Islands and is fully traceable from loch to plate. The brand has been trademarked to represent Scottish excellence in Japan.

Scotland is the world’s third largest producer of farmed Salmon, behind Norway and Chile, producing around 95 per cent of all EU-farmed salmon. 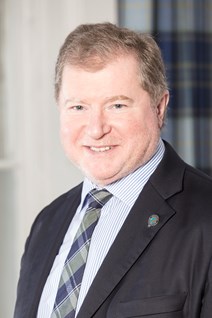