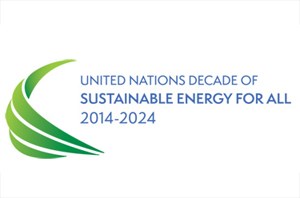 UN Decade of Sustainable Energy for All

Scotland today played host to the launch of a major UN initiative that aims to ensure sustainable energy for all by 2030.

Held to coincide with the start of the 2014 Commonwealth Games, the European launch of the UN Decade of Sustainable Energy for All (SE4ALL) 2014-2024 was held this afternoon in Glasgow as part of a trade, aid and sustainable energy focused event hosted by the Scottish Government.

Led by the UN Under-Secretary-General and Chief Executive of SE4ALL, Dr Kandeh Yumkella and hosted by Scotland’s International Development Minister Humza Yousaf, the event was attended by representatives of government, business, academia and civic society from across the Commonwealth.

The launch aimed to highlight the importance of energy for economic development, peace and security for both the developed and developing world. The event was a step towards achieving the vision set out by UN Secretary-General Ban Ki-moon, that by 2030 there will be universal access to modern energy services, a doubling in the global rate of improvement in energy efficiency, and a twice greater share of renewable energy in the global energy mix.

Recognising Scotland as a world leader in renewable energy and climate change policy, the UN Secretary-General approached the First Minister in 2012 and asked Scotland to support his global initiative. Hosting today’s European launch was one of several actions the Scottish Government has taken since.

“Scotland is demonstrating high ambition and a progressive approach to the global challenge of climate change. We have cut our emissions by 30 per cent since 1990 and have increased our onshore wind power threefold in the last decade. By 2013 we were generating almost half of our electricity through renewables and we are leading the way on research on tidal and wave energy.

“We recognise that those suffering most from the impacts of climate change have done least to cause the problem and are addressing this through our pioneering £6m Climate Justice Fund, which is empowering the climate vulnerable to access clean water, food and energy. We will build on this work through our contribution to SE4ALL, and I am pleased to announce that a new SE4ALL Forum, co-chaired by the Scottish Government and Scottish Renewables, will be set up to take this forward.”

“Scotland has a strong track record of supporting communities in Malawi to access sustainable energy and our efforts are making a real difference to people’s lives - bringing light to rural health clinics so babies can be delivered safely through the night; helping to light up homes so that children can study into the evening, and supporting people to set up small businesses. We are committed to building on this work through our contribution to the UN SE4ALL initiative.

“This event has enabled us to demonstrate to our friends from across the Commonwealth why Scotland is a world leader in renewable energy and climate change policy and a good global citizen, committed to playing our part to tackle poverty and inequality.”

UN Under-Secretary-General and the Secretary-General’s Special Representative and Chief Executive of the initiative on SE4ALL, Dr Kandeh Yumkella, delivered the keynote address at today’s launch. He said:

“Energy issues are about equity and development. In most Commonwealth countries, Africa and South-Asia in particular, energy is a women’s issue. It can mean the difference between safety and fear, freedom and servitude, and even life and death.

“We have dedicated the first two years of the Decade to highlight the importance of energy for Women and Children’s Health and Economic Empowerment. The world must come together to end energy poverty and prevent the dangerous effects of climate change. As sports unify nations, we are convinced that energy can also be the main engine for regional integration, peace and security.”

“Scotland’s history as an innovation nation and our ambitious 2020 renewable energy target mean green energy is already delivering investment, jobs and a cleaner environment for Scots at home.

“Through the SE4All programme, Scotland’s renewables industry is proud to be given the chance to use its skills to make a difference to communities across the globe.”

The United Nations General Assembly unanimously declared 2014-2024 as the Decade of Sustainable Energy for All, underscoring the importance of energy issues for sustainable development and for the elaboration of the post-2015 development agenda. The resolution stressed strong support for the Secretary-General’s initiative, launched in 2011, and seeks to achieve universal access to modern energy services, double the global rate of improvement in energy efficiency and double the share of renewable energy in the global energy mix by 2030 in order to spur economic growth, address global inequalities and preserve the environment.

The first two years of the UN Decade of Sustainable Energy for All will focus on the importance of Energy for Women and Children's Health and Economic Empowerment. The UK Department for International Development (DfID) will take the lead on this element of the initiative.

UN Special Representative and Chief Executive of SE4All, Dr Kandeh Yumkella, delivered the keynote address at today’s European launch. Scotland’s International Development Minister Humza Yousaf and Climate Change Minister Paul Wheelhouse, and the UK Parliamentary Under Secretary for International Development, Lynne Featherstone, also spoke at the event, which was attended by representatives of government, businesses, academia and civil society from around the Commonwealth.

The Scottish Government has committed to strengthen its existing work to support access to sustainable energy for communities in Malawi, through a series of additional measures that will help the UN Secretary General to achieve his ten-year vision.

Those actions include committing to send a renewable energy expert to Lilongwe to support the Government of Malawi to develop its first ever renewables strategy, and pledging to develop a community renewables toolkit that will help rural communities to access help, advice and funding for sustainable energy projects. The Scottish Government is now looking to expand its SE4ALL activity to other sub-Saharan nations over the next few years.

The Scottish SE4ALL Forum announced today will be co-chaired by the Scottish Government and Scottish Renewables and involve members representing Scottish businesses, NGOs and civic society. The first meeting of the Forum will take place in August.

Photos from the event will be made available at www.flickr.com/photos/scottishgovernment