Historical books with every place name that appeared on Victorian maps of Scotland now available online.

Historical books with every place name that appeared on Victorian maps of Scotland have all been put online and are also featured in a display that opens today [6 December 2013].

Almost 1,700 Ordnance Survey Name Books, held in the National Records of Scotland, have now all been added to the ScotlandsPlaces website, where they can be searched by the public. The books are also being linked to the relevant Ordnance Survey map to allow connected searching for the first time.

The name books were created by the Ordnance Survey’s field surveyors as they mapped Scotland from the 1840s until 1877-78, when they completed their work on Orkney and Shetland.

The surveyors compiled name books to record information about the names of every natural feature and man-made structure that was to appear on the maps. They relied on knowledgeable locals of all classes to supply them with accurate names. Their instructions were to consult landowners and their agents first, then other people of standing such as parish ministers and school teachers. In practice, and especially in remoter areas, they turned to humbler people such as tenants, shepherds and labourers. In Gaelic-speaking areas they sometimes worked through interpreters.

The surveyors added notes from printed histories, gazetteers, directories and dictionaries, making the name books a snapshot of the landscapes and townscapes of Scotland. They can be studied online along with the maps to which they relate.

A secret cave, a witch’s bridge and the Scott Monument are among the fascinating places featured in ‘From Ae to Zetland: Scotland in the Ordnance Survey Name Books’, a free display at the National Records of Scotland, from 6 December to 31 January 2014. This marks the completion of the digitising project.

“ScotlandsPlaces is a wonderful resource, and the welcome addition of the Ordnance Survey Name Books makes it an even more exciting gateway for Scots, those of Scottish descent, and anyone with an interest in Scotland, to explore our nation’s history and landscape.”

"I’m delighted to be making available online more of the great records that we hold in the National Records of Scotland. The Ordnance Survey Name Books are a rich resource for research into the history of places throughout Scotland and a treasure trove of fascinating insights. I’m pleased to be working closely with our partners RCAHMS and the National Library to add new historical resources to the ScotlandsPlaces website. Our free display in NRS allows visitors to learn more about these and other fascinating historical records that we hold.

'The OS Name Books are an incredible source of information about Scotland - a nineteenth century equivalent of our modern internet search engines. These were the key reference works for anyone wanting to find out about the landscapes, buildings and places of Scotland. This exhibition helps to celebrate the logical evolution of the Name Books - which have been brought in the twenty-first century by being digitised and made available online.'

'When combined with the other material already available on the ScotlandsPlaces website – including hundreds of thousands of photographs, plans and architectural drawings of Scotland’s buildings from the RCAHMS archive, and maps from the National Library of Scotland – it allows for a wonderfully rich study of our history.'

‘In the OS Name Books Scotland possesses a unique resource for understanding the evolution of Scotland’s complex place-nomenclature, as well as nineteenth-century perceptions of place, language, environment, archaeology and culture. ScotlandsPlaces, by making them so widely and easily accessible, has opened up a treasure-trove of material for local and national historians, both lay and academic.’ 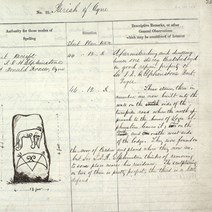 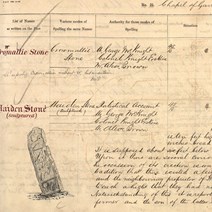