You are here:
Newsroom
News
The Marriage of a Lion-tamer and a Poet

The Marriage of a Lion-tamer and a Poet

Almost 222,000 images of birth, marriage and death records will be made available to family history researchers, including those of well-known people and unusual stories.

There were 38,716 marriages in 1938, including that between German circus performer and lion tamer Alfred Kaden, then 35, and Vera Hüsing (née Lüdtke), 25, the poet daughter of a German landowner. At the time a Glasgow newspaper described Hüsing as “vivacious, flaxen-haired and handsome” and said she had “won distinction by her poems and songs.”

The newly-released images include entries for 65,521 deaths in 1963, which compares to 54,937 in 2012. The life expectancy of Scots has risen during the last 50 years, as the growing number of growing number of centenarians shows. In 1963, only 28 people died at or over the age of 100, but in 2012 the equivalent figure was 389, or almost 14 times as many people, and well ahead of the increase in Scotland’s population.

"These new images, and the stories they tell about Scotland’s history, demonstrate the rich variety of information we have in our records.

Tim Ellis, Registrar General and Keeper of the Records of Scotland, said:

“The records that National Records of Scotland holds are crammed full of fascinating stories about Scotland’s people and history, and I know that people will find the latest additions to our online resources very useful for family history and other research. If someone out there recognises the story of the lion-tamer and the poet, we would delighted to learn what became of them.”

“We always enjoy the colourful personal stories that are revealed when the images for the statutory births, marriages and deaths records are added to the ScotlandsPeople website. In particular, we loved the story about the German poetess who married a lion tamer in Glasgow in January 1938.

“We also enjoyed finding out about the society weddings that took place the same year. We think many other fascinating stories will emerge when people start viewing these records.”

Alfred Kaden, a 35 year-old German circus performer, had specialised as a lion-tamer with lions, married Vera Hüsing in Glasgow on 5 January 1938. She was the daughter of Albert Lüdtke, a landowner, and Natalie Zielinski. The parties were both divorcees, and were married by declaration in a Glasgow lawyer’s office, under a licence of the Sheriff of Glasgow. One of the two witnesses at the marriage was John Smith Clarke, a radical politician and newspaper editor based in Glasgow, who had begun his career as a lion-tamer. On 10 December 1937, when travelling to Glasgow, Vera Hüsing escaped unscathed from the railway crash at Castlecary Station, in which 35 people were killed and 179 people were injured.

The digital images of the official statutory records are of birth, marriage and death records that were registered more than 100, 75 and 50 years ago. 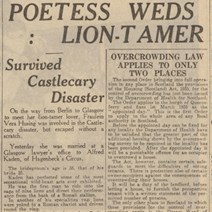 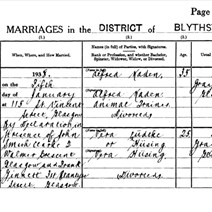