You are here:
Newsroom
News
What’s in the Box?

What’s in the Box? 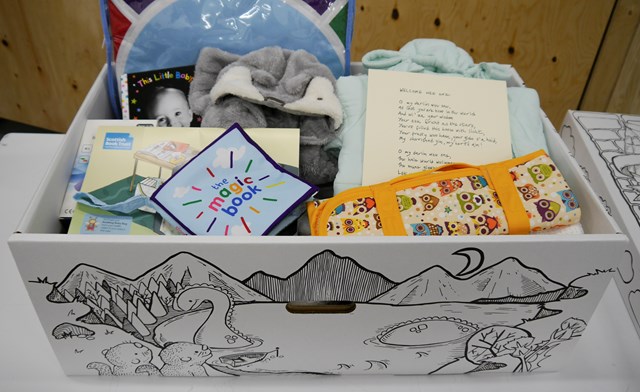 The list of contents for Scotland’s Baby Box is now available online as registration for the nationwide roll out begins.

All babies due on or after 15 August 2017 will receive a box of essential items to support parents and promote a fair and equal start for all children in Scotland.

The final research of the successful pilot which took place in Orkney and Clackmannanshire has also been published today. The findings have informed the logistics and contents of the initiative and responses have been positive, with some suggestions for improvement already implemented for national delivery.

“The feedback we have had from the Baby Box pilot has been extremely useful in our planning for nationwide delivery.

“As a result we are now providing information at initial midwife appointments, registration is taking place earlier and delivery is also being brought forward to allow parents more time to familiarise themselves with the box before their baby is born.

“The research also showed that the idea of the box was widely welcomed although there were differing views on whether it should be targeted at specific groups such as low income families or first time parents.

“It is great to see that the pilot findings confirm parents were generally extremely positive about the quality and range of the contents of the Baby Box.

“As the Box becomes available to all babies born in Scotland we will of course continue to engage with parents and healthcare professionals and look for ways we can further improve this fantastic initiative.”

Mary Ross-Davie Director for Scotland at the Royal College of Midwives said:

“This is an initiative that has the RCM’s support and we welcome any commitment by the Scottish Government that will give babies born in Scotland the best possible start in life. These boxes help to promote a crucial message for new parents about safe sleeping for their babies and will hopefully encourage parents to place babies on their back when putting them to sleep.

“Giving these baby boxes will also help new parents particularly at a time when personal finances may be stretched, and there are many people in Scotland who need this support.”

Baby Boxes will start to be delivered from 15 August 2017 for all babies due on or after that date.

There is more information about the Baby Box available here.

A separate piece of developmental research was undertaken in 2016 prior to the Baby Box pilot and is available here. Findings showed that the majority of parents surveyed were positive about the concept of the Baby Box.  When parents were provided with examples of the types of things to be included in the box they were surprised and impressed by the concept and commented on the value, range and quality of items, especially the clothing. However, there were suggestions for improvements. Overall this research provided useful feedback during the earlier stages of the Baby Box development and aided in developing the Baby Box for the Pilot.