You are here:
Newsroom
News
A Warm Welcome to Scotland

A Warm Welcome to Scotland 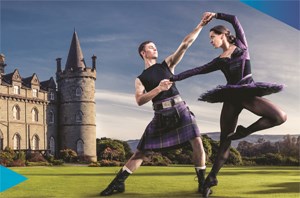 Two of Scotland’s best features - its people and its scenery - will be used to showcase Scotland to the record number of travellers expected to arrive at Scottish airports in 2015.

Imagery depicting some of the people, places and natural resources that contribute to Scotland standing on the world stage will be used in ten striking posters. Destined for Scotland’s six main airports the artwork will be in place by the end of this month.

Scottish Ballet, the Red Hot Chilli Pipers and Arbroath Smokie producer Iain R. Spink are amongst those featured. The locations used stretch across Scotland, from the historic Abbotsford House in the Borders, Aikengall Community Wind Farm in East Lothian to bustling Aberdeen Harbour.

The updated point of entry creative theme was chosen to demonstrate Scotland’s strengths to international arrivals. The images will be in place until January next year.

Cabinet Secretary for Culture, Europe and External Affairs, Fiona Hyslop said, “This is about creating the right first impression for visitors to Scotland. We are blessed with beautiful scenery and wonderful people with a flair for artistic expression, creativity and innovation. These images capture Scotland’s strengths as a modern and dynamic nation.”

Last year nearly 24 million visitors passed through Scottish airports. This is expected to rise again in 2015 to close to 25 million, building on the momentum of 2014 when Scotland hosted Homecoming, the Ryder Cup and Commonwealth Games.

Commissioned by the Scottish Government, the images will also be used online and in social media, to engage an international audience and promote Scotland as a great place to live, work, study, visit and do business.

The appetite for news from Scotland amongst Scottish diaspora and Scots enthusiasts around the globe continues to grow. More people than ever are following official social accounts with over 110,000 follows and likes, primarily from the USA.

In 2014, the country’s international portal www.Scotland.org attracted over 1.6 million visits, an increase of over 8% from the previous year. The US, Canada and Australia are the most popular visitors to the site outside of the UK.

Dr Cindy Sughrue OBE, Scottish Ballet CEO, said. “Scottish Ballet is delighted to be involved in this Scottish Government marketing campaign which is intended to raise the profile of arts and culture to people visiting Scotland. As Scotland's national dance company, we tour nationally and internationally, flying the flag for Scottish arts at home and abroad and ensuring we are known worldwide as a vibrant and creative country."