You are here:
Newsroom
News
Increased powers for Scotland’s communities

Equality and Rights Constitution and democracy 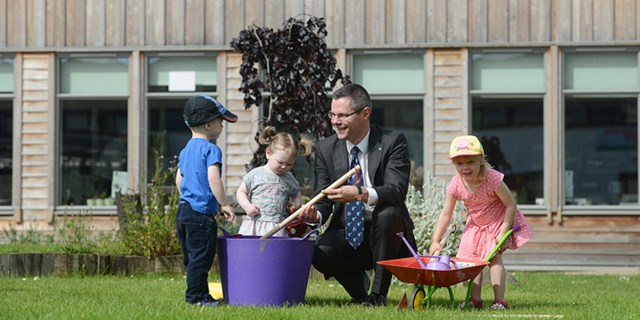 A new law will reform existing community right to buy and include measures to make it simpler for communities to take over public sector land and buildings.

The existing community right to buy will be streamlined and extended to cover all parts of Scotland, both urban areas and larger rural towns, as part of plans to have one million acres into community ownership by 2020.

The Bill will also include provision for communities to take over public sector land and buildings where they can show they can deliver greater public benefit with those assets.

Examples could include land for community groups to grow their own food, develop play facilities for young people or a place for older people to meet and socialise.

Rules on Scotland's local authority allotment sites will also be simplified strengthening the duty on councils to provide sites triggered by actual demand. The Bill will also protect allotment sites from closure.

Community empowerment can only be achieved with proper support and in announcing the Bill, the Local Government Minister also confirmed an increase in funding from the People and Communities Fund by £1.5 million to £9.4 million per year in 2015-16.

“This Bill is about enabling people and communities throughout Scotland to make their own decisions and to build their own future.

“Reforming the community right to buy, giving urban communities in Scotland the same rights as rural communities, and creating access to public land and buildings is a momentous step forward.

“This legislation will empower communities who wish to take over public land and buildings where they think they can make better use of them than their current public sector owners and ensure their ambitions are supported by public bodies.

“The Kabin is an excellent example of what can be achieved with the right support. It supports around 20 organisations all working together to support over 1500 individuals of all abilities, in the local community.

“As part of our commitment to empowerment we have increased our People and Communities Fund by £1.5 million which means that from 2015/2016, £9.4 million will be available annually to support community-led regeneration in our most disadvantaged communities

“This Government believes firmly in subsidiarity and local decision making, and just as independence can ensure decisions about Scotland are taken by the people who care most about Scotland, the people who live and work here, so community empowerment can extend that opportunity to every community in Scotland."

David Cruikshank, Executive Director of Lambhill Stables, a development trust in the North of Glasgow, welcomed the launch of the Bill. He said:

“This Bill will allow urban based development trusts to pursue an interest in owning land and buildings. And working in partnership with local authorities and other public bodies, that ownership will transform the lives and environments of their communities”.

“The forthcoming Community Empowerment Bill now provides opportunities to make progress on a number of the measures around increased community land rights in and we want to see it used to maximum effect and welcome this opportunity.”

“There is no shortage of thoughtful and committed citizens, wanting to change Scotland for the better – they just need to be allowed to do so – and we believe this Bill is helpful in giving that permission.

“Our argument to Scottish Government has been that what’s needed is a ‘community right to grow’ akin to access rights. It makes absolutely no sense to have land, and other assets sitting around derelict and underused, while people can’t access and develop it.

“Our vision is of a Fruitful Scotland where people can grow fruit and local food close to where they live and improve their local environment, and also their health. We welcome the way in which the Bill is framed in giving a presumption in favour of community groups being able to access assets, unless there is a good reason otherwise."

“There is a surge in demand for allotment gardening with long waiting lists throughout Scotland in urban and rural areas. The proposed legislation has the potential to bring the provision of allotments in Scotland into the twenty-first century.

“An overhaul of outdated allotment laws, some of which date back to the nineteenth century, is long overdue so that local authorities are obliged to meet the demand for allotments.

Martyn Evans, Chief Executive of the Carnegie UK Trust, welcomed the Bill, in particular the provision to embed Scotland Performs in legislation:

“Placing a duty on future Scottish Ministers to develop, consult on and publish a set of outcomes which describe their long-term objectives for Scotland would further strengthen Scotland’s position as an international leader on measuring wellbeing.

“Putting Scotland Performs on a legal footing sends out a strong signal that increasing GDP should no longer be the sole priority of government. It allows the Scottish Parliament, civil society and the wider public to more readily call the Scottish Government to account on Scotland Performs and opens up new opportunities for civic debate on national wellbeing.”