An Official Statistics Publication for Scotland

Local Development decisions were quicker in 2017/18. The average decision time for Local Developments (26,220 applications) in 2017/18 was 9.0 weeks, over one day quicker than the average of 9.2 weeks in the previous year and the quickest annual figure since the start of this data collection in 2012/13. Local housing applications were decided in an average of 12.2 weeks, three and a half days quicker than the previous year (12.7 weeks).

Major Development decisions were quicker in 2017/18. The average decision time for Major Developments (238 applications) in 2017/18 was 33.6 weeks, almost three weeks quicker than the average of 36.4 weeks in the previous year. Major housing applications were decided in an average of 38.2 weeks, more than five weeks quicker than the previous year (43.4 weeks) and the quickest annual figure since the start of this data collection in 2012/13.

For the year 2017/18 the overall rate of approvals for all types of application was 93.7%. The delegation rate was 95.7%, the highest rate over the past eight years.

Statistics on annual and quarterly planning performance in Scotland have been released today by Scotland’s Chief Statistician. Reduction in number of planning applications decided in 2017/18 compared with previous five years.

The overall average decision time for Local Developments is the quickest annual figure since the start of this data collection in 2012/13.

The figures presented in this Statistical News Release exclude pre 3rd August 2009 cases and any applications concluded through the use of a processing agreement between the developer and the local authority, where an agreement on timescales for decisions can be made either at the beginning of the application process or at a later stage. Also, some applications exclude time periods in which particular delays have been outwith the control of planning authorities. Further information on these types of applications is available in the full statistical publication.

Schemes of Delegation identify who will make the planning authority's decision on different types of planning application, whether it is an appointed officer or elected members. This also influences the route for any subsequent appeal. These schemes are required by legislation and are available on the websites of each planning authority. The delegation rate measures the proportion of planning decisions that are made by appointed officers.

Read the full statistical publication containing a range of annual and quarterly trend information on average decision times by development types and information on delegation and approval rates, appeals and local reviews, and enforcement activity.

[1] Applications for Approval of Matters Specified in Conditions (AMSCs) relate to conditions attached to planning permission in principle requiring the further approval, consent or agreement of the planning authority for any detailed aspect of the development. 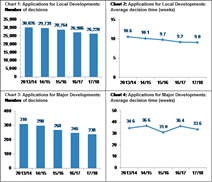