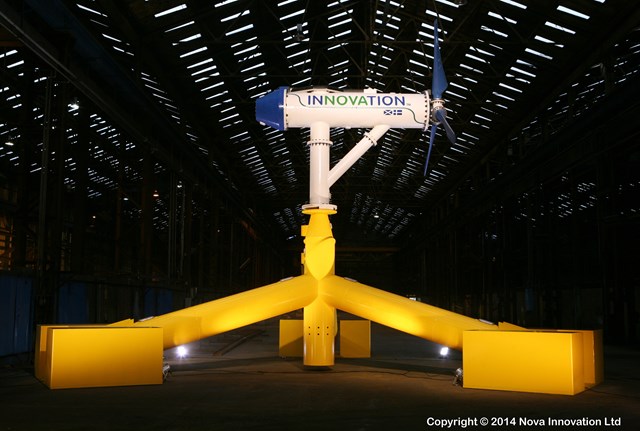 The turbine will power up to 30 homes, a locally owned ice plant and Cullivoe Harbour Industrial Estate on North Yell, Shetland.

The turbine sits on the seabed at a depth of over 100ft and consists of a propeller that is spun by the power of the tide as it flows past. The rotating propeller drives a generator that produces electricity, which is transmitted onshore via a 1km subsea cable.

“For the first time, anywhere in the world, a community owned tidal turbine is generating electricity. It will have a positive impact on the North Yell community and economy.

“Scotland is recognised as world leader in wave and tidal energy, with a quarter of Europe's tidal stream and a tenth of its wave-energy potential.

“We must tackle climate change and reduce our reliance on fossil fuels through better and more efficient uses of energy. That is why Scotland generated a record amount of electricity from green energy sources last year.”

“This is a tremendous moment for North Yell. For the first time anywhere in the world, electricity is being generated from a community owned tidal turbine.

“Having used as much local expertise as possible we're keen to see Shetland taking a leading role in marine renewables."

“We are delighted to announce that the Nova 30 tidal turbine has been successfully deployed and is generating electricity to the grid. It marks a major achievement for the wider Scottish tidal industry with over 80 per cent of Nova’s supply chain Scottish based.

“By working in close partnership with the North Yell community and our suppliers, we believe that this project demonstrates the growing confidence in the marine sector and strengthens Nova Innovation’s leading position in the emerging global marine energy industry.”

Seonaid Vass, director of renewables & low carbon technologies at Scottish Enterprise, which has worked closely with Nova to help it realise its growth ambitions said:

“With more wave and tidal devices being tested in our waters than anywhere else in the world, Scotland is recognised as a global leader in the marine energy sector.

“The successful deployment of this device is an important step in the development of technologies in the tidal industry, and we look forward to continuing to work with the company to supports its growth plans.”

For further information about the turbine, please call Simon Forrest at Nova Innovation on 0131 554 2242 or 07870 164445. Email simon.forrest@novainnovation.com or http://www.novainnovation.co.uk/

The project is 100 per cent owned by the North Yell Development Council (NYDC) a company limited by guarantee and a charity.

In 2010, the project received £167,763 development funding from the Scottish Government’s Community and Renewable Energy Scheme (CARES) supported by Community Energy Scotland, £16,990 from the Shetland Islands Council and £1,200 from the NYDCs own funds.